Radical Landscapes: activism, identity and imagination in a not-so-cold climate

The land has always been a contested space.  The 2000 ‘right to roam’ legislation, despite its inviting title, only covers about 8% of land in England.  Getting outside and enjoying the fresh air and countryside were high priorities during the pandemic, and focused people’s minds on what was and was not possible. Land ownership and access to the land have become very current issues. So it is unsurprising that the lockdown period was also an opportunity for Tate Liverpool to reassess our relationship both to land and to landscape through artistic responses to both. The result is the exhibition Radical Landscapes, which ran through the summer of 2022, and the publication of an associated book (1).

The exhibition kicks off with a striking road sign (A303) built by immigrants by Jeremy Deller. The A303 of course runs through the Stonehenge site, itself built by immigrant Beaker people from Europe, and the exhibition ranges widely from raves to road protests, folk tradition to magic, via land art and the climate crisis.  Access, control, the use of land, and the relationship between landscape and identity, are subjects that have been studied discussed and written about for decades, usually through the lens of class and landed privilege. John Berger in a clip from his 1972 TV programme Ways of seeing, recorded his critique of Gainsborough’s painting Mr and Mrs Andrews exposing the way in which land ownership and exclusion were flaunted in portrait painting in the 18 Century. Landscapes have also had their up-to-now hidden narratives about race and colonial exploitation and the dislocation and loss that go with that, given more prominence, leading amongst other things, to a backlash by some National Trust members as that organization tries to come to terms with its legacy. In fact this approach is not recent either. Ingrid Pollard’s work has explored the presence of Black people in rural spaces for decades, and in one of her best known works Wordsworth’s Heritage (1991) trespass and inclusion are prominent themes.

As well as heritage, nationality, race, and belonging, landscapes have been a site of conflict, activism and magic.  The peace activists at Greenham Common, well represented with a whole gallery of still and moving images, created by participant-artists such as Jenny Matthews and Monica Sjoo, bring these strands together. The Peace Camp (1981-2000) was hardly in a beautiful landscape; a nondescript verge along a perimeter fence with a view of the military, their vehicles and their nuclear silos. But this was about the land not the landscape, and what use that land was being put to and with whose consent.  The same can be said of the road protests at sites such as Twyford Down and Newbury in the 1990s, and the mass trespass of Kinder Scout in the Peak District in 1932 by ramblers and Young Communists. The Duke of Devonshire’s gamekeepers may have won the battle that day, but the political impact was huge, and was a major factor in the creation of the National Parks in 1949.  Magic gets a look in too with druids celebrating the solstice at Stonehenge, documentary film both of raves suppressed, ending in the ‘Battle of the Beanfield’ as New Age travellers were corralled by the Police, and more Wicker Man-type expressions, such as Anthony McCall’s Landscape for Fire; conceptualist manifesto or haunting primitive rite? 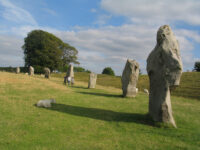 This pantheist approach to engaging with the landscape is picked up by artists ranging from Derek Jarman with his filmic A Journey to Avebury, to Jeremy Deller’s Cerne Abbas, a more than usually striking figure in white neon on a dark green background, and Homer Sykes‘ photographs of the Scottish Burry Man, the King on Horseback and the Allendale Tar Barrel parade – science fiction from the past.

The ‘land art’ on show can be equally strange and unsettling. It is no accident that Richard Long (he of A line made by walking) starts his perambulation in this exhibition from the same Cerne Abbas giant, meticulously walking and charting every track and path within six miles of the figure. This is where the land merges into the landscape, as with Tacita Dean’s remarkable image of an ancient English oak, Majesty, tactile and mystical in its winter glory, John Nash’s cornfields, The Vale of the White Horse by Eric Ravilious, a mystical, stylized depiction of a horse cut into the chalk, and Paul Nash’s standing forms in the Wiltshire countryside.  Landscape of a more domestic nature isn’t overlooked either. The formalism of Charles Jones’ extraordinary photographs of vegetables taken when he was head gardener at Ote Hall in Sussex around 1900 contrast with the experimental nature of Derek Jarman’s garden at Prospect Cottage on the shingle of the beach at Dungeness.

But this eclecticism while at times exhilarating ranging as it does so widely across artists and genres, can also feel like intellectual confusion, and this is particularly the case with the section entitled Art in a climate crisis. There is no doubt that landscapes are shaped by climate, and that the climate breakdown we are experiencing is radically reshaping landscapes all over the world. But the responses offered are at odds with the challenges. Gustav Metzger’s five screen Liquid crystal environment (1965) is particularly jarring.  Allegedly harnessing the natural processes of heat and light to dramatize positive flux and change within society, it was used as a prop to mesmerize crowds at Cream concerts in the 1960s and still uses remarkable quantities of energy. More interesting is Superflux’s Mitigation of shock (London 2050) a video imagining life in a flat in a future in which climate change has impacted on global food security, and depicts the impact of living with crop failure and escalating food and energy prices. Sounds familiar already. The section on cooking and sharing an unfortunate urban fox feels more retro than futuristic, road-kill without the road. But what these pieces have to do with landscapes, except perhaps of the imagination, is not explained.

Landscapes aren’t just radical. Conservative and conservation are words that have a common root, and the conservation aspects of the landscape are underplayed, despite movements such as rewilding having both the radical and conservation at their heart.  Likewise guerilla gardeners and allotmenteers seek to reshape, reimagine, and conserve at the same time; peaceful but subversive. None of these are examined, and these unexplored tensions apparent throughout the exhibition, remain hanging. Radical Landscapes certainly provokes thought in anyone interested in the way land is used and by whom, as well as why many landscapes are worth protecting and enjoying, but the route map remains indistinct and despite its diverse approaches, ultimately it fails to chart a truly radical path.