Many years ago when I  first took on an allotment  on the Bartlemas site I knew fairly little about the Bartlemas hamlet which it curls around. But I recall being  surprised, moved and delighted to find myself  watering tomatoes and basil of an evening and hearing glorious music  and voices coming from the chapel on the other side of the boundary hedge.

As I learned, the chapel is that of the leper hospital  founded in 1126 by Henry I, and uniquely in England, it and its chapel dedicated to St Bartholomew, are still in use, the hospital as a residence.

The whole site is now a conservation area and a surprising oasis of rurality in the frenetic atmosphere of east Oxford. In fact the chapel, which was used to stable horses when Cromwellian forces were beseiging Oxford in the Civil War in the 1640s and only returned to ecclesiastical use in the early 20 century, is relatively rarely used. But a highlight of its calendar is of course St Bartholomew’s Day,  24 August. St Bartholomew is the patron saint of healing, particularly skin diseases, having allegedly been flayed alive for his beliefs. It is a natural connection to make for a leper hospital, and the holy well in the  grounds some 15 metres from the chapel is a reminder of the sacredness of the place for pilgrims, seekers and itinerant holy men (as they would have been in those days). 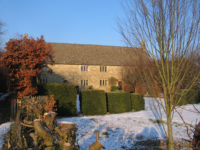 St Bartholomew’s legacy  has been  a complex one. In medieval times St Bartholomew’s Day marked the end of summer and the start of autumn. Dew that fell on that day was believed to have healing properties, and pilgrims would come to church in bare feet to have holy dew cure foot ailments. Indeed those with more serious skin diseases would roll naked in the dew for its healing properties. But the turn of the year meant more. The lazy days of summer were passing, and the hard work of bringing in the harvest was about to commence. So it was last chance for revelry and a bit debauchery before the work began and the nights drew in. St Bartholomew’s Fairs, known as ‘Bartlefairs’ or ‘Bartlefeasts’, were common; perhaps the most famous being that held at Smithfield in London from 1133 to 1855. Starting out as a trading event and specifically a cloth fair, it rapidly morphed into  something far more louche. By the middle of the 17 century St Bartholomew’s Fair, by now of a size to  be of international importance, was far from being somewhere to seek healing or a successful business deal, though quack medicine sellers were common enough. Rather it was an opportunity to experience the exotic; prize fighters, musicians, astrologers, acrobats, contortionists, tightrope walkers, puppeteers, fire-eaters, freak shows, stalls selling everything from ginger bread to singing birds, and wild animals, were part and parcel of  the show. Not just any wild animals either. Dancing bears, performing monkeys,  caged tigers, baby crocodiles being hatched from eggs by steam, and even a ‘learned pig’  observed by Wordsworth in 1815, were all part of the fun. As were ‘soiled doves’ – not caged birds, but prostitutes in coyly labelled tents, or just ‘off-fair’ in Cock Lane.

It was a source of inspiration for many a literary figure inspiring Ben Johnson’s play Bartholomew Fair, Daniel Defoe whose heroine in Moll Flanders meets a well-dressed gentelman at the fair, and both Samuel Pepys and John Evelyn, who provide vivid descriptions in their diaries.  Not to mention Wordsworth and that pig – which could apparently tell the time to the minute and pick out any specified card in a pack while blindfolded. The vulgarity, loutishness and drunkenness of it was all too much for the Victorians and it was suppressed in 1855.

But back at Bartlemas Chapel  this 24 August, the glorious service  which I had first heard while tending my vegetables, concluded with a glass of pimms on the lawn, a fitting combination of  joys of the fairs and the traditions of the healing properties of the great saints memory.