Muck meets the Minister (to be)

The Oxford Farming Conference (OFC) is a bit of a fixture in the food and farming calendar. The great and the good show up every year. Sometimes (like last year) a former activist does public penance for their past foolishness and bends the knee to the corporate behomoth – as Mark Lynas did, disavowing his activist past with Corporate Watch and announcing his conversion to the cause of GM technology. For the past five years there has been a alternative, the Oxford Real Farming Conference (ORFC), founded by Colin Tudge and his wife Ruth West. The difference could hardly be more stark, one has a ticket price of £375 and is sponsored by Syngenta, McDonalds and a host of other agri-business giants. The other costs £20 and isn’t sponsored by anybody. But they are both in Oxford, on the same days.  This helps, as I discovered when I got a call from the Labour Party  the weekend before asking for assistance. Huw Irranca-Davies the Shadow Food and Farming Minister  was due to pitch up at the OFC and make a speech, but wanted  the chance of a different perspective and could I help? Delighted. Suggested a visit to the ORFC. The response was amusing and instructive. Yes, but can it be incognito as they wouldn’t want the NFU to throw a fit (I thought Mrs Thatcher had tamed the power of trade unions decades ago – clearly not in this case….). Now Irranca-Davies turns out not to be a New Labour clone at all. 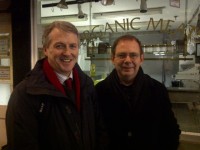 Apart from this rebellious behaviour towards this masters in the NFU, it turns out that his wife’s family (the Irranca’s of his name) are Italian immigrants to the Welsh valleys (he represents the former mining, now rural, constituency of Ogmore in west Wales) who run a small family  dairy farm making cheese, mostly a local parmesan and pecorino. So Huw knows a bit about farming and indeed the situation of small rural farms. What to take him to? Why the session on the future of family farms in that home of Welsh exiles in Oxford, Jesus College.

It turned out to be a triumph. The speakers were diverse,  thoughtful and amusing and the audience young and scruffy enough to look as if they might even have some connection with family farms. Indeed Anneleise the no 1 Labour candidate in the south east for the forthcoming Euro elections brought along her  perfectly behaved 6 month old son Freddy, who was naturally fed only on locally produced milk and ensured the session had the widest age range of any at the conference.

Star performer was a young woman from a family farm in Herefordshire, Becca Watkins. She had a lot of important points to make about generational continuity  and it benefits for community solidarity and a sensitivity to  landscape bio-diversity that a long term connection to ‘place’ brings, as well as some sharp words about the risks of  family inheritance, ranging from a lack of willingness to innovate, to the tensions between generations and the  boundaries (or lack of them), between parents/offspring and business partners of different generations. Peppered with jokes and anecdotes of the  ‘I know you don’t put jeans in the colours wash, mother’ -type,  she painted a vivid picture of life beneath the calm bucolic surface, and revealed to  an amazed audience that ‘the Archers’ aren’t real people – though their travails are real enough in rural communities.

@becca_watkins1 @divinity65 @ORFC @AnnelieseDodds fantastic personal insights from you, on challenges of farm succession. Enjoyed it too!

Afterwards we repaired to ‘the Mitre’ for tea and a discussion on some of the issues with Joe from Cultivate and Michel from the Centre for Agro-Ecology and Food Security at Coventry University and a photo opp for Annleise with Huw promoting local (ish) south east foods.  I never knew politics could be that much fun!